Time to Check in -- Bryan Wizemann, One Year After IFW 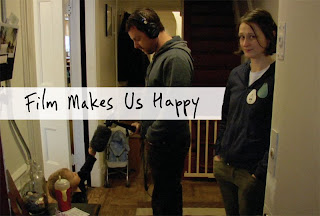 Almost a year after writer-director extraordinaire Bryan Wizemann participated in Independent Film Week's Project Forum last year, he very generously agreed to recap his incredible year for me. Bryan, like all our Project alumni, is most definitely a filmmaking force to be watched! Here he is:

"Attending the IFP market last year proved invaluable. Our meeting with Amy Slotnick (Frida) directly led to our screenplay being optioned by Jamin O'Brien and Worldview Entertainment. They are out to directors right now and development is moving quickly. The script is called Humor Me, written with Andrew Semans, and it follows a woman who gets dumped because she's just not funny, and the movie follows her along as she tries to become funny. It has all the hallmarks of a high-concept romantic comedy, but retains an indie sensibility. We have high hopes for it.

During that year, a short of mine got released into the online ether. Called Film Makes Us Happy, it's a short doc that portends to be the last fight my wife and I will ever have about making films. I could describe it, but better just to watch it, it's currently the featured film at Wholphin's website alongside a short interview.

What I'm probably most excited about is working with the producer Mike S. Ryan toward making the feature An Entire Body. It's a dark, dramatic work, which doesn't make development any easier, especially when most independent financing has evaporated, but we're close. The script won a national award not too long ago, and we've attracted some great people. We're one lead actress away, so cross your fingers... Any additional info on any of the film work can be found at http://ballastfilms.com/"